Ekonom: Digitization of public administration will enable people have time to go out with friends

Czech Republic is about ten years behind the digitalization of public administration, while Estonia, on the other hand, is a model for the world. Except for marriage, divorce and property purchase, there is no official act in this small Baltic country of 1.3 million people that cannot be done online. Even small children learn about robotics there. Marten Kaevats, a former digitalization advisor to the local government, claims that this transformation is not so much a matter of new technologies as of people's willingness to work with them.

Why  Estonia is an example of digitization?
We didn't have the money to prepare a classic, paper-based system of European-style public administration in the 1990s. However, we already had the knowledge and skills to create an electronic one. In addition, Estonians, like all people in the north, are already forced to cooperate with regard to the harsher nature.
The older generation in the Czech Republic is afraid of digitization. How did Estonia manage to eliminate this mistrust?
We launched the first program for this in 1997, and the government, in cooperation with the private sector, invested a lot of money in digital education. It was mainly the older generation and people with lower incomes. It ultimately affected 19 percent of the population. In addition, at that time, many people began to work with computers and the Internet. Confidence gradually developed that public services could also be transferred to this basis.
Is the emphasis on education also your advice for the Czech Republic?
A similar project will definitely help, but it is also necessary to see that even digitization is different than it was in the late nineties. Back then it was about e-mail and the Internet, today technology has moved on. So even education must be continuous and cannot end with one thing. For example, my son already has robotics lessons in kindergarten. It is similar to situation when you`re learning to play a musical instrument. Not everyone becomes a pianist, most just learn the basics.
How expensive are your digitization projects and who pays for them?
In Estonia, it is 200 million euros annually from the public sector and it is actually money from the European Union. This may be a problem in the future, as European resources are becoming lower. However, we are quite cheap; in the Netherlands, the cost of digitization per person per year comes to 500 euros, here it is 50. We use much less money, so it is obvious that we can work better with it. The private sector contributes to other costs, the most significant is financial support from banks and telecommunications companies. 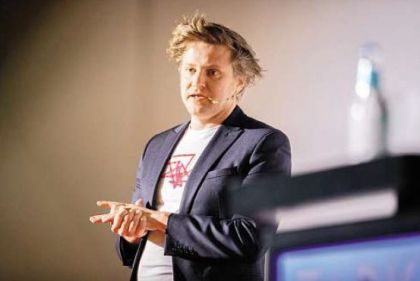 Is it possible to quantify the savings associated with digitization, for example those that will bring a reduction in the number of officials?
It is difficult to measure, but just by being able to sign documents electronically, about two percent of GDP is saved. When I have to print a document, sign it, and then carry it with me to the office, it takes a lot of time that I could otherwise spend working. Plus, the documents are sent instantly, that helps too. This eliminates expensive paperwork. The number of officials has decreased, for example, only a third of the original number work at tax offices. At the same time, they manage a much larger economy than before and in a higher quality. New opportunities are opening up for clerks who have lost their jobs. Especially in education, because we need quality education. But it is also about work in the social field.

It takes 15 minutes and you start a company or file a tax return. The fact that we facilitate the development of small and medium-sized enterprises has a positive effect on the economy. According to the index of ease of starting a business, Estonia ranks first in the world. Even before the Russian invasion of Ukraine, we were one of the countries in Europe with the fastest economic recovery in the post-covid era, thanks to the ease of doing business.
Would this  also raise more money in taxes?
Collecting them is easy and this reduces the incentive to evade tax obligations. We belong to the countries with the lowest share of gray economy..
Isn't it an advantage that Estonia is a small country?
In large states, digitization can be more difficult. At the beginning, the smaller area is really an advantage, but our model has also started to be used in Japan and Germany. These countries have tens of millions of inhabitants and it is obvious that it is not so much about the size of the population as about the culture and the way of thinking and the ability to work with these systems. Digitization is not just about technology, it is much more a matter of thinking.
Unfortunately, quite a few countries do not have a clear plan, strategy or vision. They often focus on specific services and small parts of the system and lack the tools for overall change. At the same time, creating a good plan means that everyone in the society understands it and believes in it regardless of the political opinions. Building a digital society takes time. Even as politicians rotate in their positions, the transformation must continue regardless of the current political constellation.
How to generally characterize the Estonian model acceptable to all the politicians across the spectrum?
It is nothing unique, it is based on openness, transparency and adaptability or flexibility. It is constantly evolving. Its ultimate goal is to make life easier for users, i.e. citizens. This is a basic parameter. You deal with the social impacts of digitization. Therefore I will ask whether it contributes to the isolation of people in cyberspace and does not lose interest in normal interpersonal communication. Social networks like Facebook try to get people to spend as much time as possible on them. The longer they keep attention of their users, the better it is for such companies. In public administration, however, it is exactly the other way around, where the point is that a person loses as little time as possible on digital communication with the authorities. So that person has time to go out with friends instead of dealing with bureaucrats.
The original article was published in Czech by the Ekonom weekly.
Photo credit: Madis Veltman.