Prague has not been building new apartments recently which led the capital to face residential crisis. In 2018, there was recorded the lowest number of issued constructions permits in Prague, and thus a low number of started dwellings since 2016. Prague also experiences a significant gap between completed and started dwellings. Though Prague has a strategy how to deal with these numbers, the process is slow.

Based on analysis, in past 40 years 160,000 people came to Prague, and the same number is expected to come to the capital by 2030, according to Deloitte. However, to accommodate these people, Prague needs to complete and build 5,5 – 6,000 apartments a year. 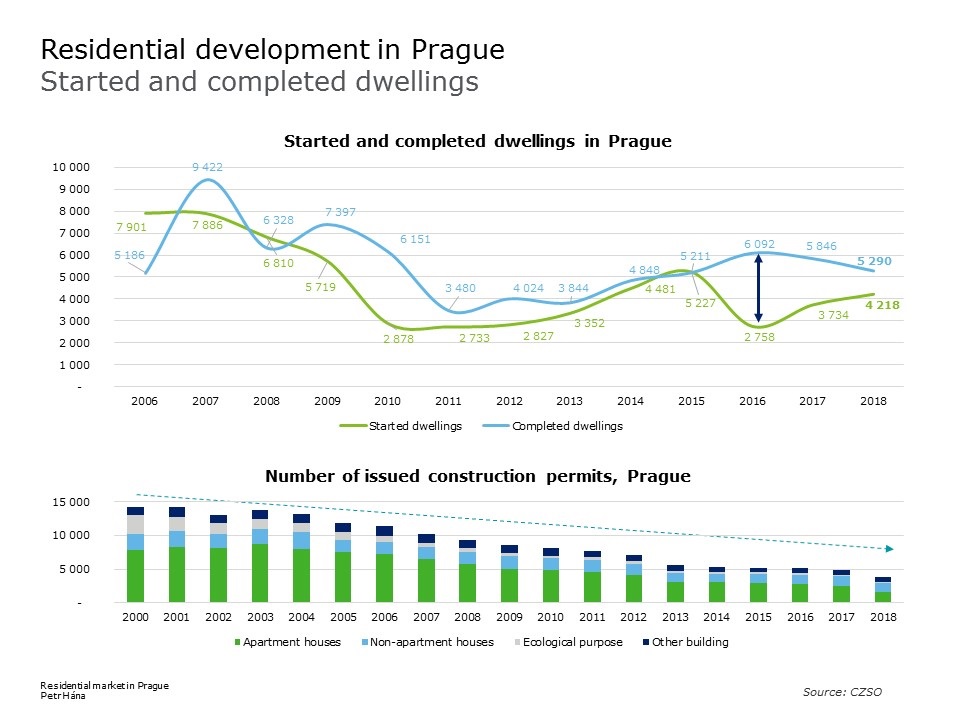 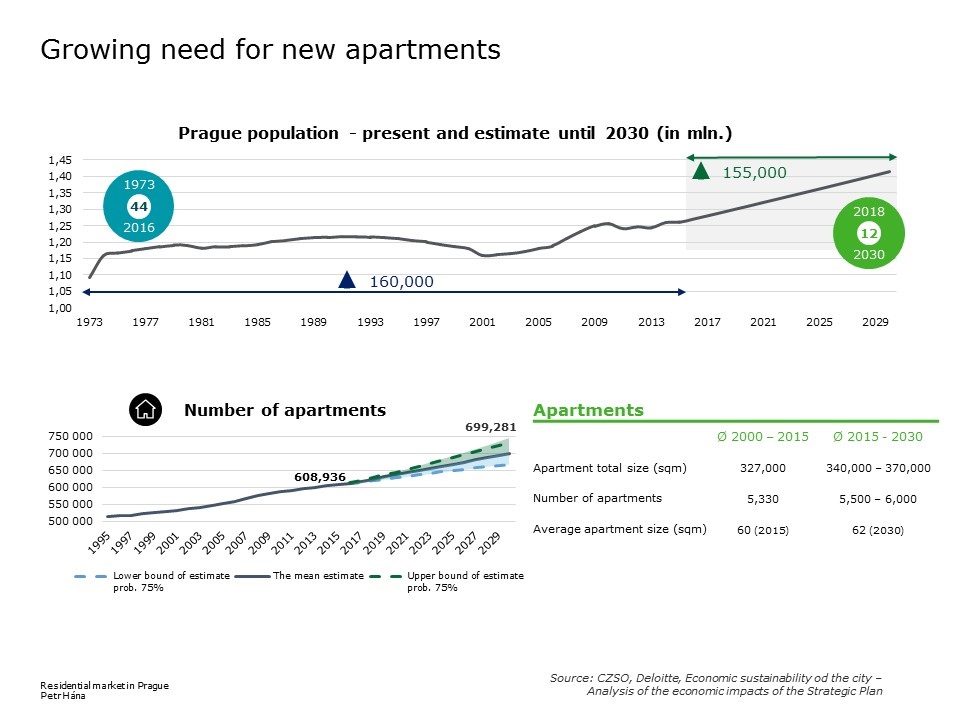 Prague has not even started construction of these apartments; thus, the capital will be lacking them in next few years. For Prague, it is important to change this process and start solving housing crisis, to stay the centre of the Czech Republic, the educational and business centre, it needs to offer opportunities for living. 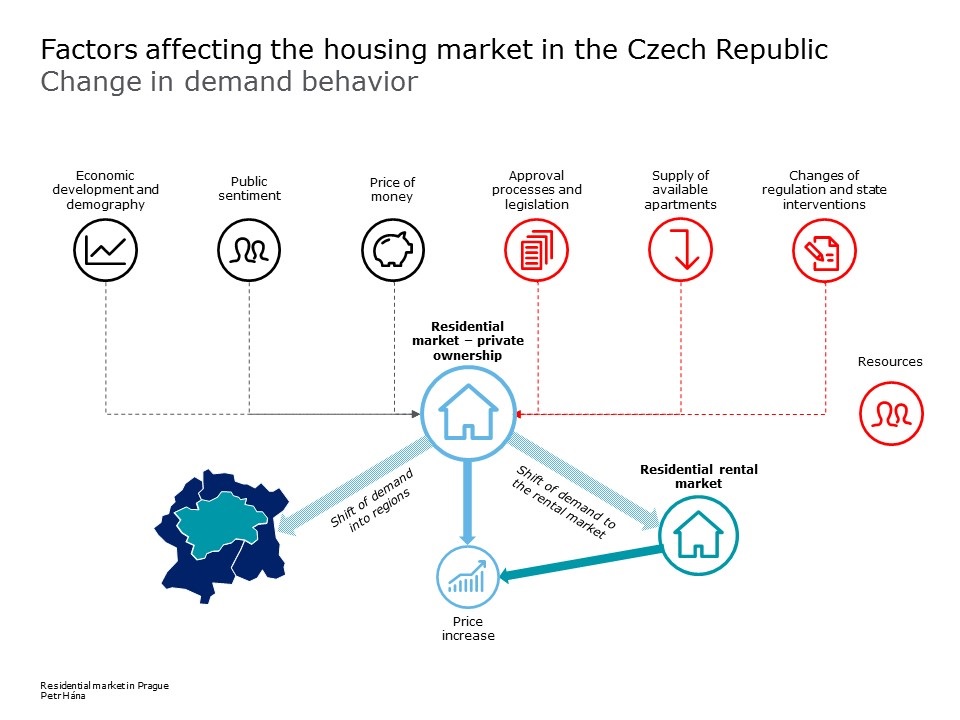 Housing prices have been increasing, and for ordinary buyer it is difficult to buy apartment in Prague. He/she has two possibilities, either move to rental housing market or to move to the outskirts of Prague. But then the capital becomes the centre people need to commute to, which puts emphasis on development of infrastructure.

In Prague, there is 1.6-2mn people every day (either living in Prague or commuting to the capital) and therefore, we have to treat Prague as 2mn population city. In many Western countries there are restrictions how the market prices can grow, increase in prices is moderated.

IPR suggested we could not compare to Vienna or Amsterdam, because in Vienna most of the houses are in hands of the city, which invests and gets money back from rents, Amsterdam city owns the land and rents it. Therefore, Prague needs to figure out which way it wants to go and which system to implement. And without legislation and help of state, this cannot be achieved.

NIMBY (not in my back-yard) effect

According to US study, the more ownership housing, the more NIMBY effect. In 40 years in the second half of the 20th century, the number of homeowners in USA rose from 59% to 68%. According to research, this increase co-participates on growing restrictions of new construction.

People who own properties tend to be in defence when there is a plan to build new dwellings next door, meaning owners contribute to the crisis themselves by being against construction.

Long and uncertain new construction permit processes make residential properties more expensive in all segments. If compared to 1990s when it took 4 years to build Dancing house from acquisition of the project to its opening, in 2018 it takes 9 years to build an average project. Permitting process is the most time consuming within all project phases. 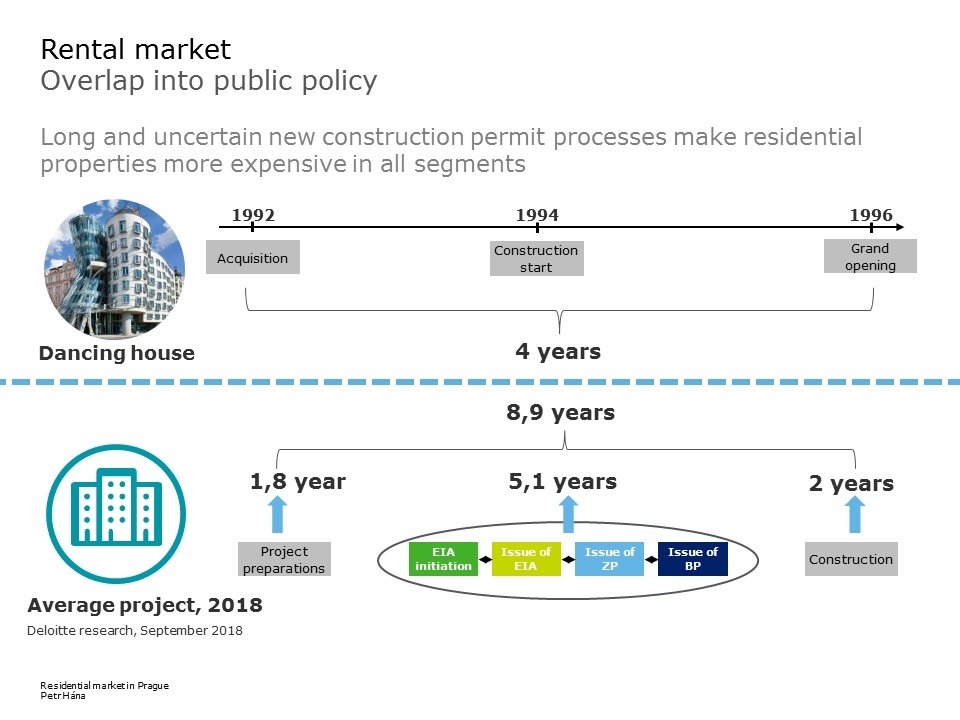 Before crisis the market was increasing, then in 2007 it dropped and a year later it started to increase again until 2016-2017, then the trend is down again due to 2018 regulations by CNB. The market dropped to CZK280bn. Regulations hit the market heavily. 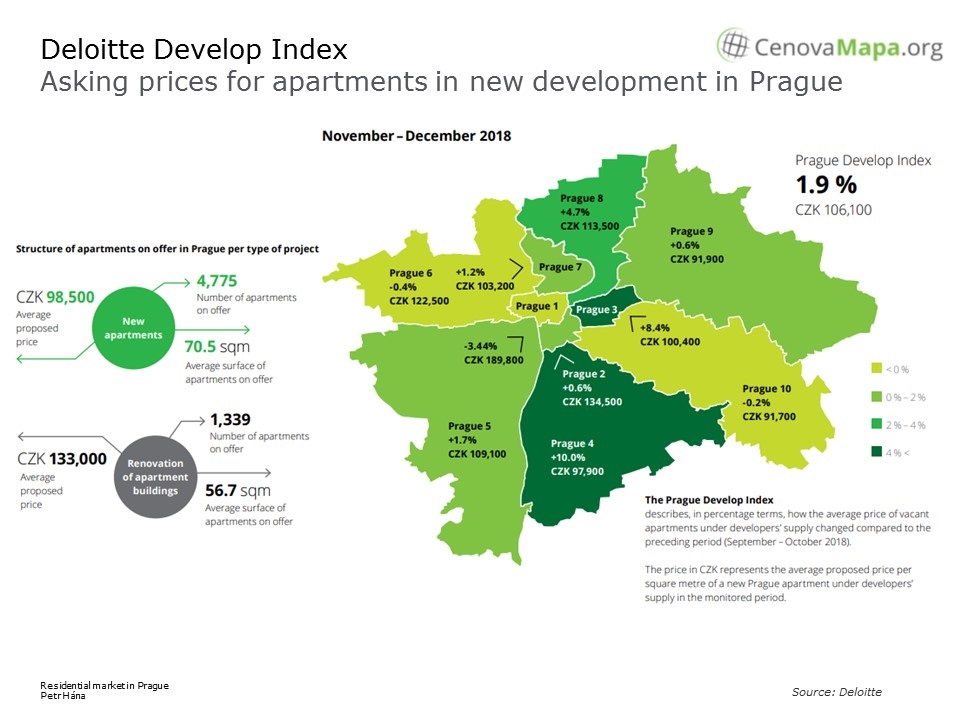 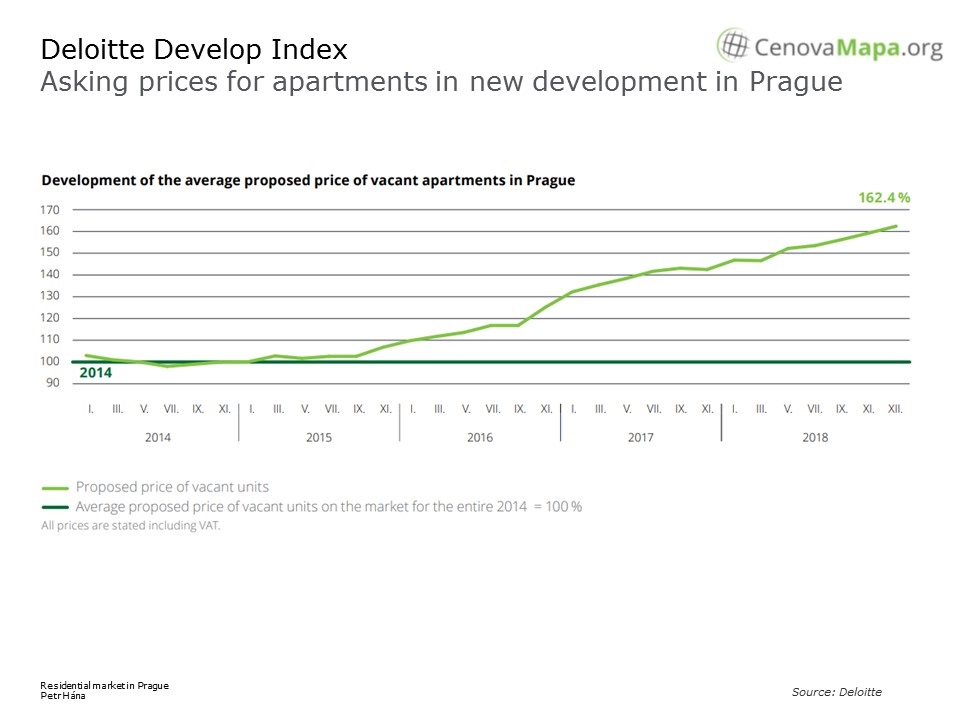 The most expensive apartments are in Prague 1 and Prague 2, the cheapest in Prague 9 and 10. We are now above 60% above the average of 2014. 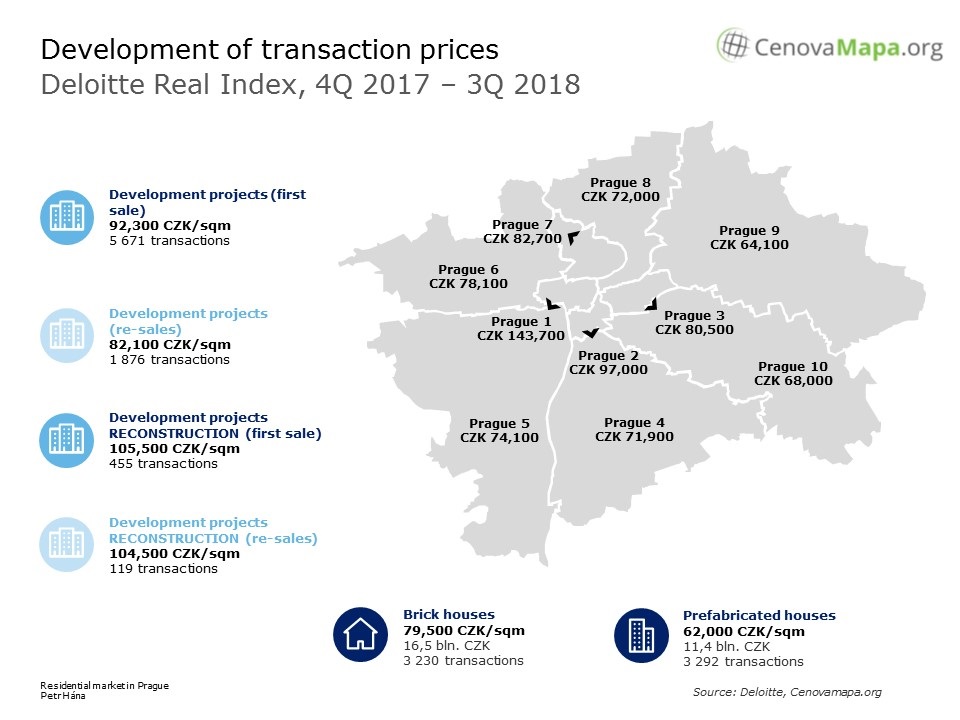 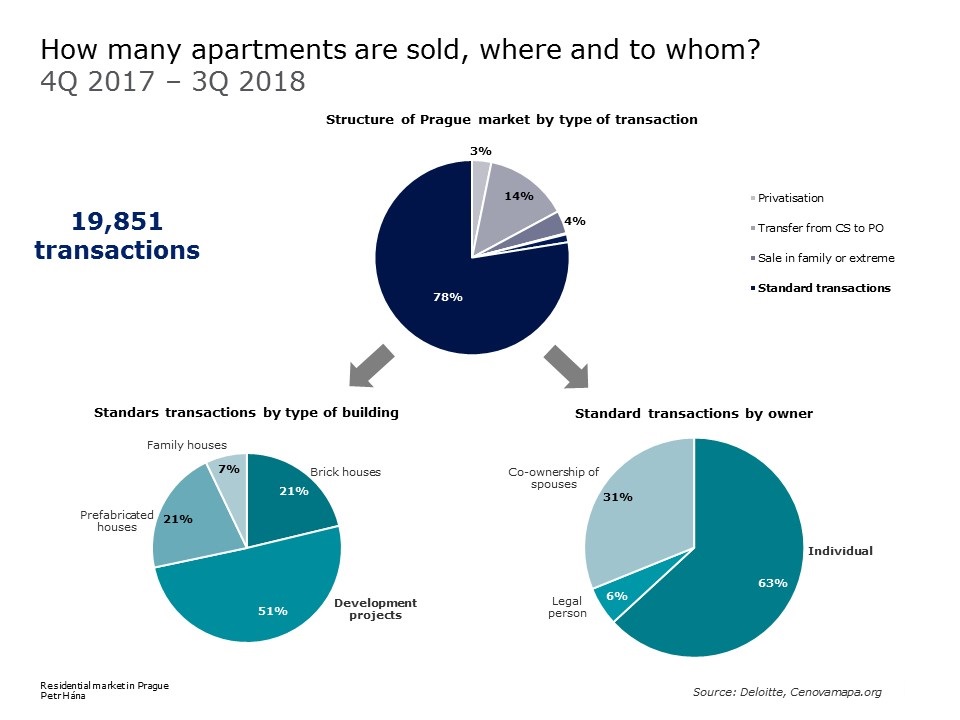 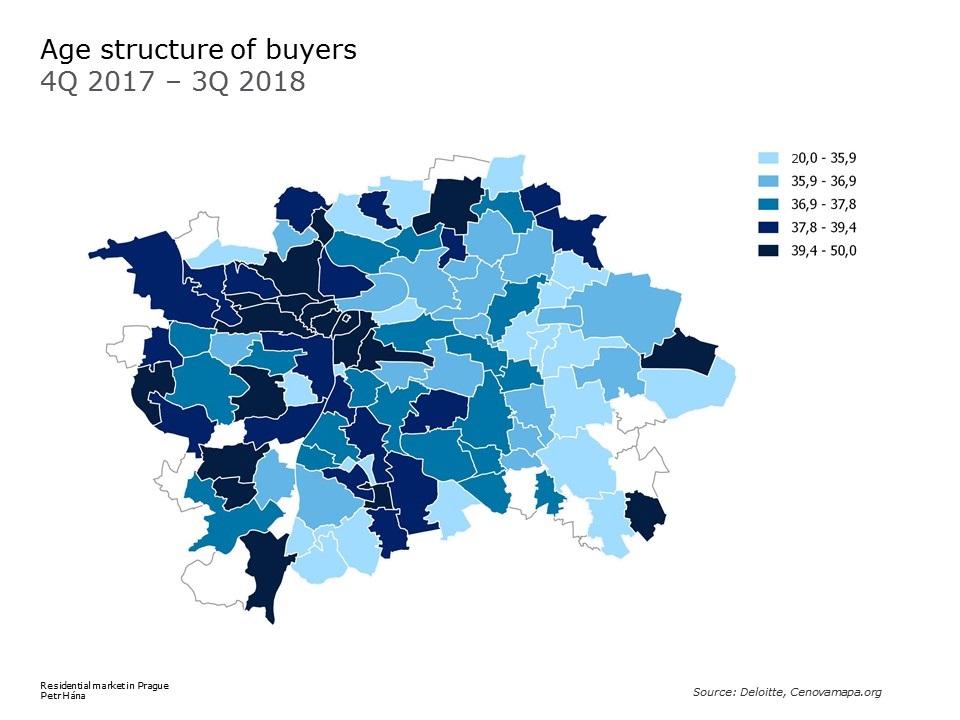 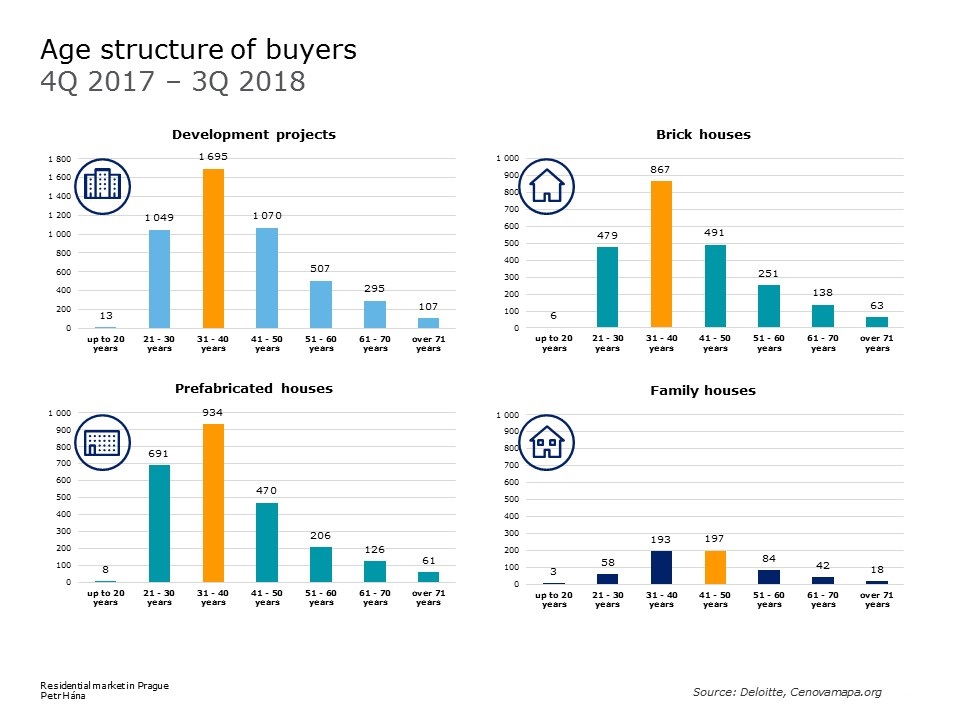 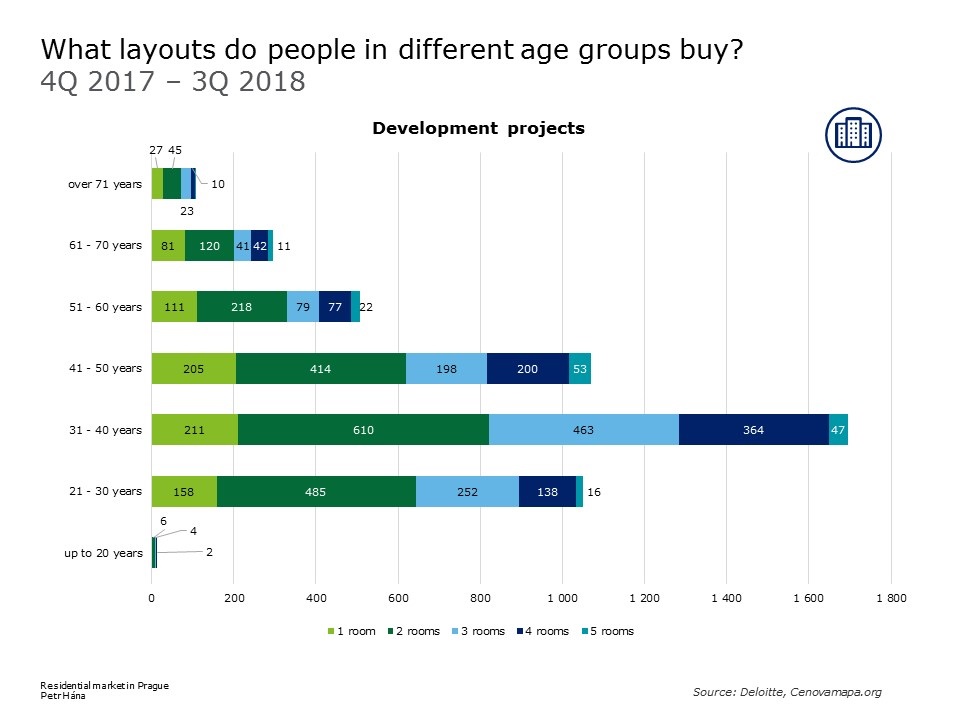 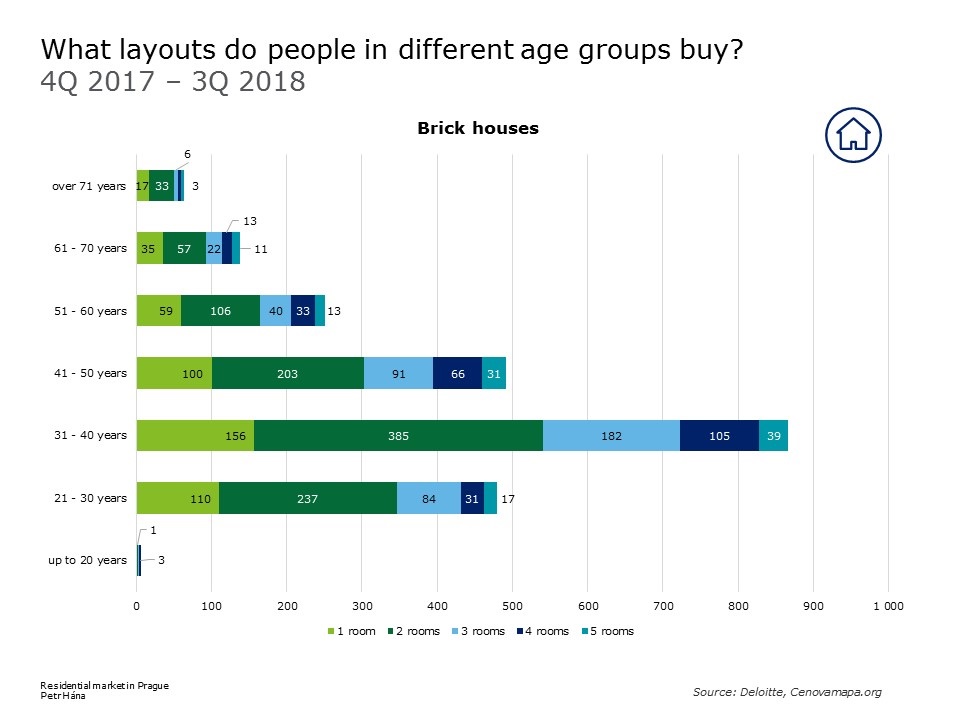 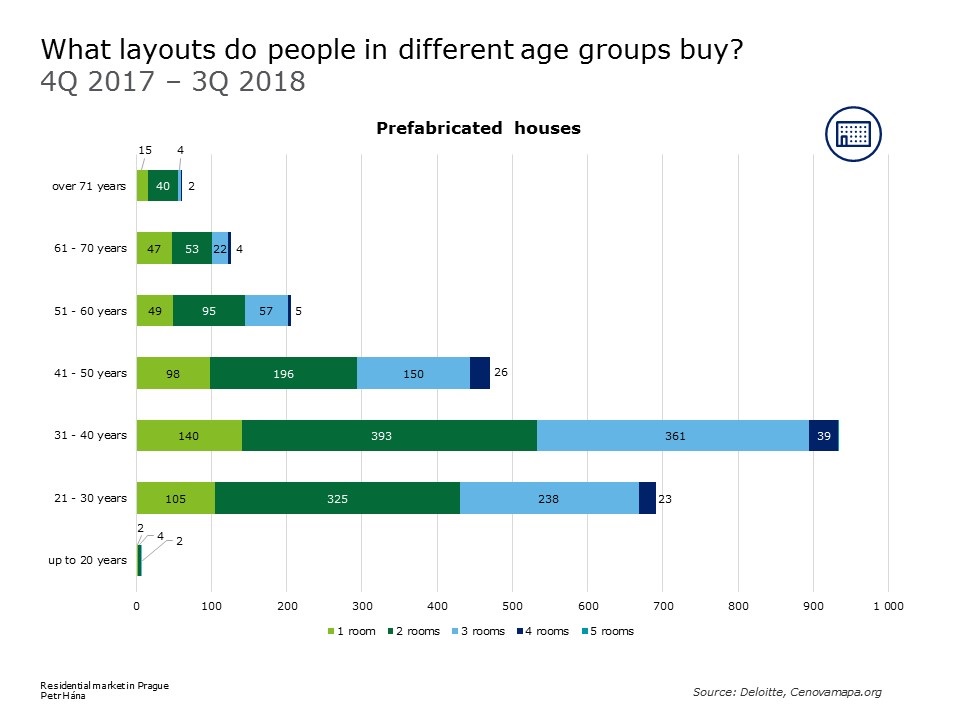 According to current legislation, regarding main regulatory determinants – noise standards, sunlighting and daylighting, apartment buildings in Vinohrady would not have been able to be built, it was illegal 3-4 years ago.

Therefore, architects and investors had to be working around it, building ateliers which, however, cannot be bought on mortgage, building glass walls which go together with higher cost, or do gymnastics with façades.

According to change of Uzemni plan and last year´s change of regulations, we can build on brownfields more quickly and easily, we can have buildings on the noisy streets, increase density, and have apartments to face the North.

According to Jaromir Hainc, there are positive changes in 2 different areas: land preparation, planning – land development and real estate developments (preparation of projects, talking architects). In these areas a lot have changed. New Prague building code has been finally accepted by Ministry of Regional Development to be applicated in Prague.

IPR is trying to speak and discuss with clients, investors, developers before the official stages and whole process start, so they can react and discuss what the city would like to have and what developers can change in time. This is helping to fulfil the planning issues.

Within the planning part IPR still works on new metropolitan plan where it would like to change the way how the planning is done, and to make the unstabilized areas more clear to what is possible to build which egotiation should be shorter than today.

Within development areas there needs to be a discussion in order to plan these areas as the part of the city. After 20 years of application of current plan in place there are clusters which do not talk to each other, to their neighbours. For this purpose, IPR established the CAMP (Centre of Architecture at IPR) for such discussion.

It is important that NGO and public sphere accept that it is necessary to discuss and be accountable, on the side of NGOs and politicians, both coalition and opposition.

According to Skanska, public participation is helping. Clear and transparent communication of investors and developers with community is needed. After the municipal elections in 2018, the atmosphere is positive. Everybody is aware of the situation regarding permitting processes. The politicians are ready to discuss these issues with developers. However, no concrete steps and activities are still to be seen.

One authority, one stamp

The construction code needs to speed up, clarify, unify, simplify the process. Today more than 50 stamps in order to start the project is needed. In the capital, there is currently one Prague, 57 Prague parts, 57 mayors, 57 coalitions, 57 budgets, more than 57 interests, and 22 building authorities. It is a puzzle which takes years to assemble. One authority, one stamp, one data storage, one interpretation would be a solution.

The City Council so far approved deep analysis, legal possibilities how to establish one joint authority that will proceed the planning permits and building permits. However, there has not been made mutual agreement among coalition partners yet. The current coalition is trying to open the questions that have been closed for many years and are inviting people to the table.

IPR applied for a research by TACR two years ago how to make procedures in Prague more efficient. The propose might be in three level – the city of Prague will do it itself through the Director of City Hall; what Prague can do through the City Assembly to change the status of Prague; Prague can propose changes to the law through its possibility as the regional at the national level. Now IPR works on the first and the second levels. But decision-making process in Prague is difficult as the members of the Assembly are at the same time the mayors of the borough.

IPR assured it works on update of the Prague building code, regarding preparation of Metropolitan plan. Metropolitan plan is expected to be approved in 2023 according to the law (according to the schedule of former political representation). IPR stressed that the plan is very flexible, apart from few conditions, the investors can build flexibly (based on %, min./max. of parks etc.).

The crucial part is negotiations with the local boroughs and with the state, which is difficult to deal with, as it is related to the changes of legislation. In the CR, usual way how to solve the problem is prescription or regulation, a static plan, however today, the lawyer should help to prescribe the process as e.g. in Britain, including the result and how to come to this particular result as the process needs to be in line with the process itself, not just the final product.

Metropolitan plan is now in the phase of negotiation with state bodies, ministries, which are responsible for all different issues (monument care, environmental protection, transportation etc.), those have objections and the city has been negotiating. Then comes the part when the city should negotiate with local municipalities, which leads to re-designing the plan according to how the municipalities will decide on changes. Then the phase of new public hearing will come up, and the investors will have more right to send objections. After the plan is amended again it is approved.

As constriction is from cost perspective the most expensive part, many developers due to lack of capacities of the economy are not able to start new project. Therefore, Skanska together with Ikea came with the project for people with ordinary income, initially a nurse, today a pre-school teacher. The aim of this modular construction made of wood is to have price of Boklok 25% lower than the average commercial development project.

This is very popular in Scandinavian countries and is currently entering UK. It cannot be copy/paste to the Czech Republic, due to standards, material, communication with municipality etc. Therefore, Skanska came with product Livo to be implemented here in the Czech Republic (rather Central Bohemia than Prague as land in Prague is too expensive) in upcoming years which could bring more affordable housing to the CR.

Affordable housing, social housing and co-housing as a new concept

Co-housing is a new concept to be discussed. Also, student housing should be part of discussion. Currently, there is a place for co-housing in Prague, one project on the market in Prague, titled V Bloku, with 30m2 apartments.

10 years ago, nobody wanted to talk about student housing, however, today, investors woke up asking whether developers have any projects for student housing. According to IPR, co-housing is currently for specific part of the market. Specific people, certain percentage of population who demand it.

The state should rather focus on social housing. E.g. the UK government paid stable investment into social housing, housing was available. In 2016 the investment went down, to zero investment of public sector into housing. And it is when referendum on Brexit came. This should be a warning for us!

Therefore, the issue of affordable housing is something that needs to be discussed with the central government.