Impact of Tourists on the Economy - AmCham Hospitality Recovery Proposal

International tourism contributes more to the country’s economy than is revealed in national statistics. Not only do tourists serve an “export” role by spending income earned abroad at Czech hotels and in other industries designated as the tourist sector, but tourists also support the restaurant, retail, culture, banking (through withdrawal fees), telecommunication, and transport industries. National and city assessments of the economy do not assess this impact. We estimate, conservatively, that tourists contribute CZK 11,189 per night spent in Prague.

Hotel rooms are essential infrastructure that makes this spending possible. Without rooms to stay, tourists would not generate revenue for the other industries. The amount of that revenue directly correlates to the quality of the hotel room: five star rooms generate more revenue directly and indirectly than four stars, four star rooms generate more direct and indirect revenue than three stars, and so on. If the aim is to create more valued-added tourism after the end of the pandemic, maintaining hotel room capacity in the four and five star category should be a priority.

How Prague is different from other Czech destinations

Prague hotels also operate more efficiently than regional hotels: they have higher annual occupancy rates than other regions. Some of this effect is due to higher seasonality of regional tourism. Nevertheless, the impact of the pandemic had a higher impact on Prague hotels due to Prague’s higher dependency on international travel and the higher operational efficiency (Prague hotels went from 70% occupancy to below 20% occupancy while regional hotels dropped from between 31.3-57.9% occupancy). The drop in occupancy had a greater impact on their ability to meet fixed costs and on staffing. 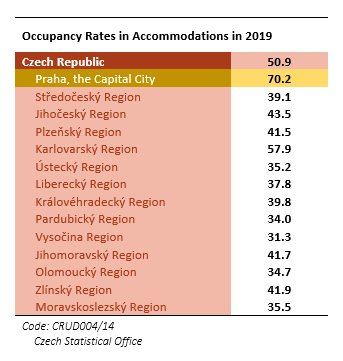 Since Prague hotels provide the primary accommodation infrastructure for tourism’s contribution to national wealth creation, have been impacted more by the severe decline in international travel, and the severe drop in occupancy has had a greater impact on their ability to meet fixed costs and employment compensation, a rescue program targeted solely to sustain capacity is needed. Without sustaining enough to capacity to meet the expected return of demand in 2023, the recovery of the national tourism and the Prague downtown economy could be limited.

A per room subsidy between CZK 6000-12000 monthly would help hotels meet that cost. The subsidy should be for hotels that were operating soundly in 2019. To prove this, participating hotels would need to prove 2019 corporate tax payment on profit (as well as VAT and payroll tax payment).

Furthermore, the subsidy should help restructure capacity on the market to ensure a greater number of hotels operating with 35% capacity or more. To achieve this, participating hotels would receive the subsidies on a monthly basis after proving revenues of 15% (based on VAT receipts) year-on-year for the proceeding month. 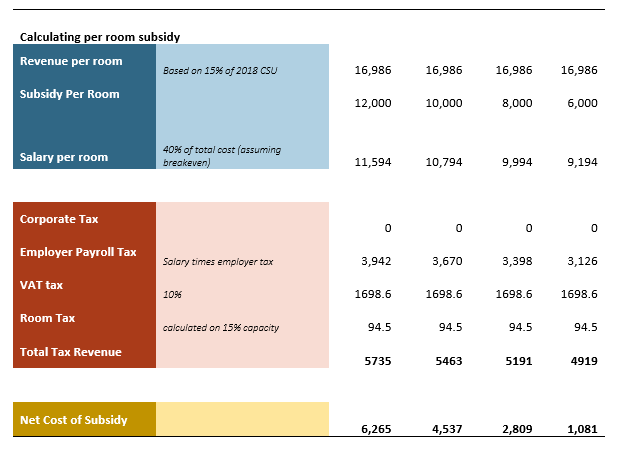 If the government decides expend public money through a targeted rescue program, the Prague hotel industry should compensate taxpayers in the future through a targeted tax on their revenues. If, as expected, the international tourist industry recovers in 2023, the government could impose a higher room tax (currently CZK 21) on Prague hotels in order to recapture public money spent on the subsidies. Such a tax could recover the subsidies within a 3-4 year period. After that time, the money could be earmarked for building the tourism and cultural infrastructure. 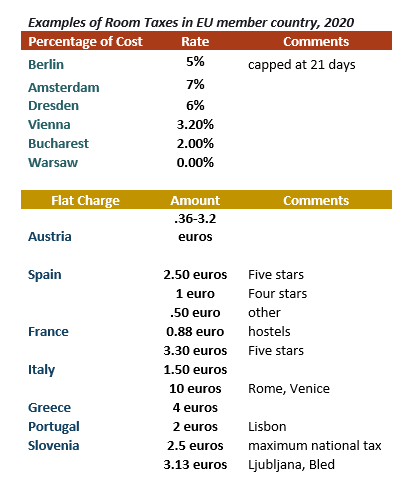 [1] Domestic tourism circulates wealth within the Czech economy, thereby shifting wealth from region-to-region. To the degree that Prague tourism creates national wealth, the more wealth created by international tourism in Prague, the greater the shift in wealth created by Prague citizens visiting other regions as tourists.

This working document was presented to Minister of Industry and Trade Karel Havlíček and representatives of the Prague City Hall.