Government Restrictions for Crossing the Border of the Czech Republic

The state of emergency ended on May 17. 2020. Conditions for entry to the territory of the Czech Republic and quarantine measures are defined by the Ministry of Health. State of emergency was declared again from October 5, 2020 for 30 days, with further extensions, currently until January 22, 2021.

ENTERING THE CZECH REPUBLIC is based on the TRAFFIC LIGHTS SYSTEM (green, orange, red indication for countries).

The emergency measures currently in effect should lapse with the end of the state of emergency on January 22, 2021. Currently, this includes nigh curfew (9 pm - 5 am) and ban on free movement during the day when all inhabitants are limited to essential trips to work, grocery shops, medical appointments etc. With the exception of family members, no more than two people can meet in public places, no more than 15 people can participate at weddings and funerals. More,

Czech borders remain open. Border controls were not introduced. Hotels are generally not in operation for tourists. Provision of accommodation services is restricted and limited to listed exceptions (business travellers, foreigners stranded in the country, etc), and hotel restaurants can only serve food to hotel guests between 5 am and 9 pm, or operate via take-away windows. Restaurants are allowed to sell food over take-away windows until 9 pm. Food delivery services are allowed.

It is possible to travel to the Czech Republic only for essential reasons. The 24-hour-rule for entering CZ without testing applies to listed reasons, such as business trips, not tourism. Cross-border workers and students are not affected. Rules on employment of foreigners and issues related to their residence during the state of emergency can be found here. (Source: Ministry of the Interior). Government decree on crossing borders as of January 5, 2021. 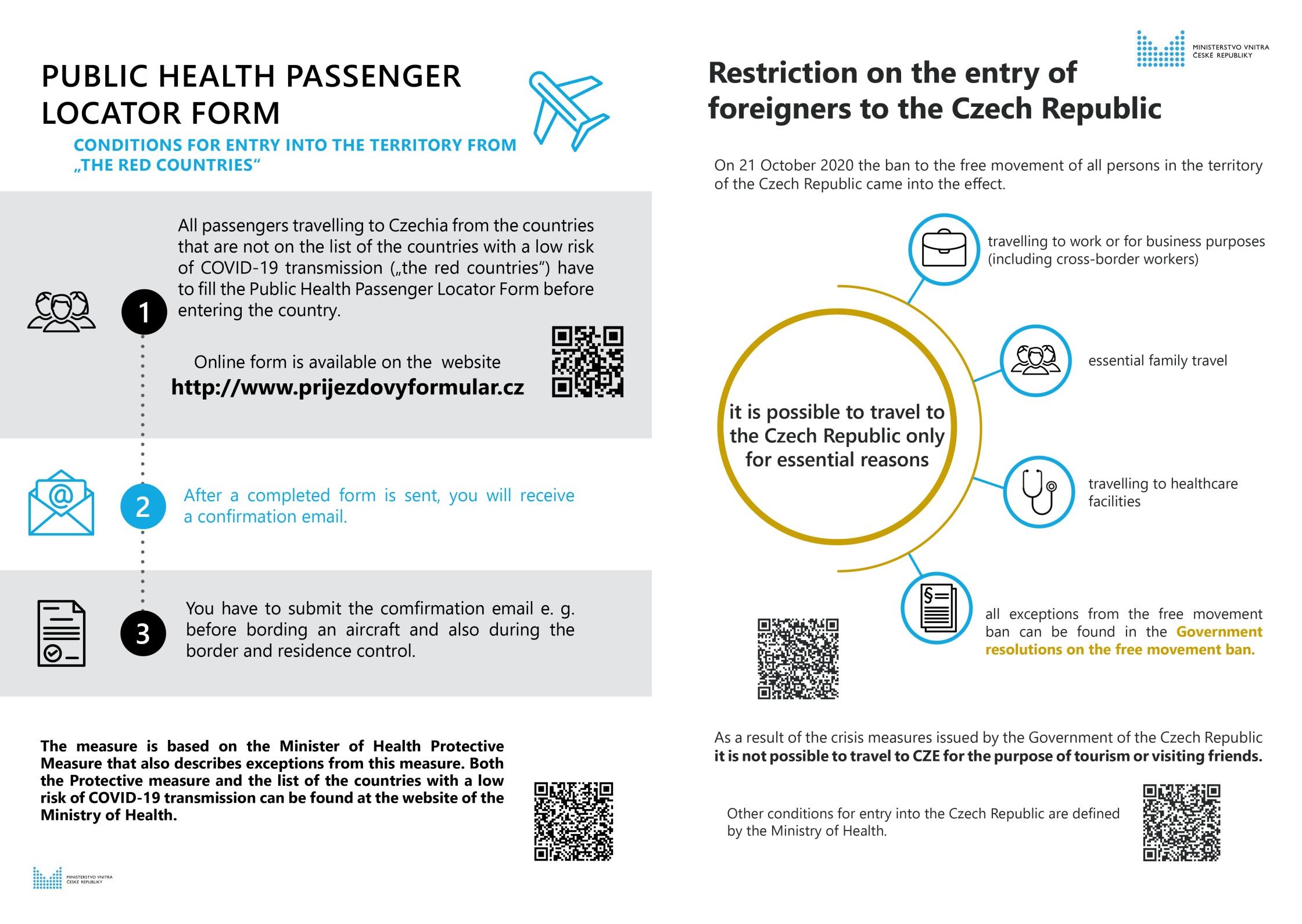 As of November 17, it is possible to travel to or from the Czech Republic for urgent health, family, business or work reasons for the period of time not exceeding 24 hours without necessity of filling "the passenger locator form" or undergo PCR testing.

From November 9, EU+ citizens, residents and third country citizens with residence permit issued by the Czech Republic who are employees, teachers and students arriving from the low-risk countries on the list marked with asterisk (i.e. orange zone countries) are obliged to submit a negative PCR test result prior to entering workplace or educational institution.

As of September 21, the obligation for workers, students and teachers from these countries to undergo the second PCR test 14 days after entering the territory of the Czech Republic was lifted. More.

On September 21, the Ministry of Health in cooperation with the Ministry of Interior launched an online registration form for travellers arriving in the country after spending more than 12 hours in the past 14 days in a country that is not on the list of low-risk countries.

Citizens of third countries, meaning of countries outside of the EU+, continue to be banned from entry to the territory of the Czech Republic, apart from the listed exceptions, in accordance with the EU coordinated approach. 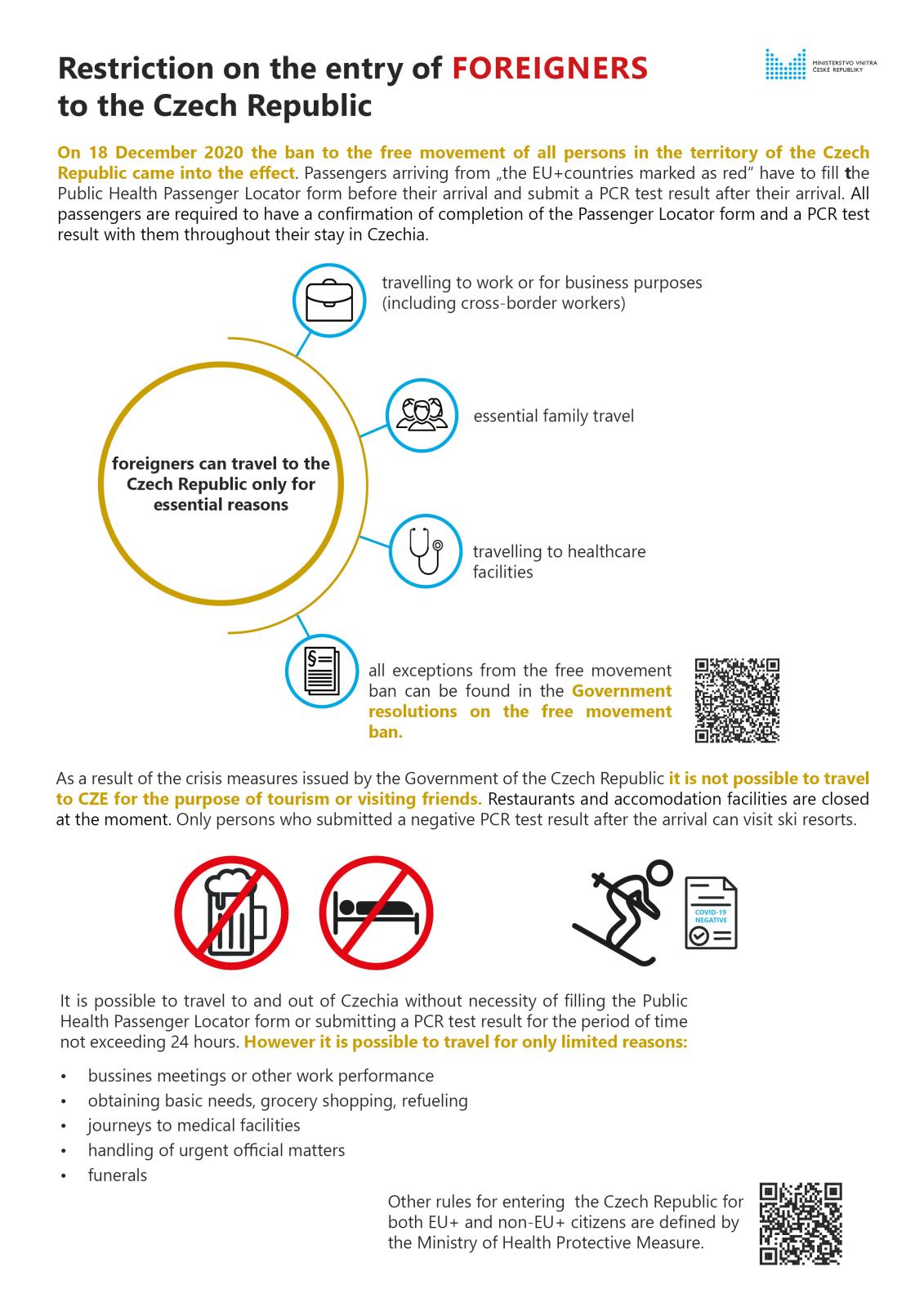 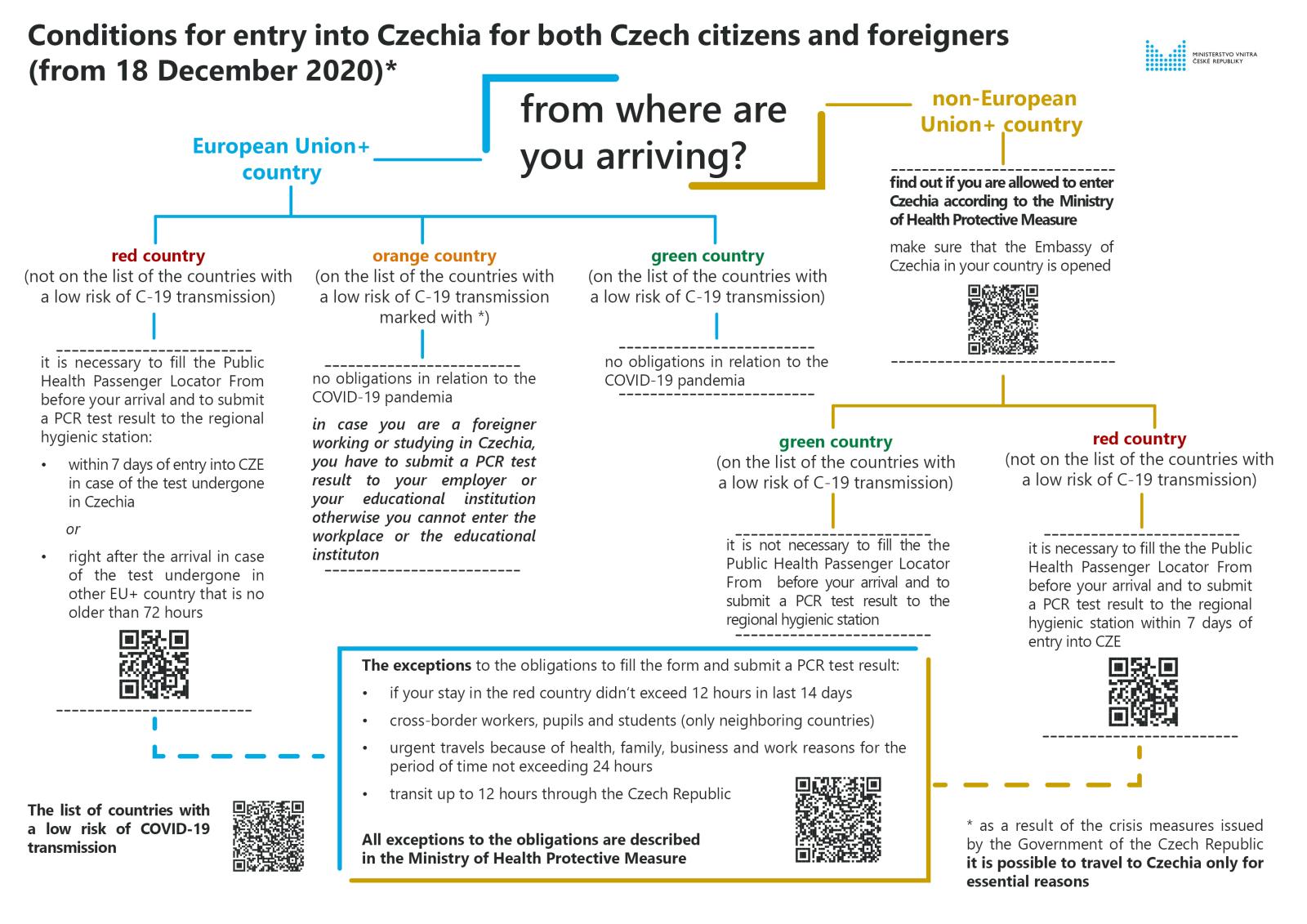 TRAVELING TO OTHER COUNTRIES - conditions have been regularly updated by the Ministry of Foreign Affairs.

As of September 1, 2020, Hungary closed borders for foreigners until February 1, 2021. Citizens of the Czech Republic, Slovakia and Poland who have booked at least a one-day stay in Hungary before October 6 with a date not exceeding October 31, and proved this together with a negative PCR test in English or Hungarian not older than 5 days, were allowed to enter the country. Then state of emergency was declared in Hungary on November 1. More details.

As of September 9, Germany has added the city of Prague to the list of high-risk countries. Travellers who stayed in Prague during the last 14 days arriving to Germany are obliged to undergo 14-day quarantine or provide a negative PCR test (less than 48 hours prior to entering Germany). As of September 16, the Central Bohemian region and as of September 23, all Czech regions with the exception of the Moravian-Silesian and Ústecky regions were added to the high-risk list. From September 25, whole Czech Republic is on German high-risk list. The Saxony region currently allows Czech citizens and residents to enter the region without a negative PCR test result, if their stay in the region does not exceed 12 hours (as of November 17). In Saxony, newly, obligatory qauarantine will not be required from those who went through Covid and subsequently were in contact with a Covid-positive person. This does not apply to Bavaria. Region Bavaria does not allow to cross border (no testing, no quarantine) for the purpose of shopping between December 9 and January 5. Cross-border workers and crossing the border for family reasons are not affected.

From September 14, travellers from the Czech Republic to Switzerland and Liechtenstein (with the exception of transit within 24 hours after the entry, critical infrastructure workers and commuters) are obliged to undergo a 10-day-long quarantine even in the case of a negative PCR test result. After December 14, measures should soften.

From September 18, eight Czech regions and from September 23, whole Czech Republic was added to the Belgian high-risk list (with Prague on the list since September 11). Travellers are obliged to fill-in an online registration form prior to the arrival and undergo quarantine after entering the country, with exceptions. More details.

From September 18, the Czech Republic was added to the Slovak list of "red" countries. Anyone returning from the Czech Republic, with the exception of commuters within 30 km of the nearest border crossing, students, teachers, researchers, health professionals, farmers, social workers, critical infrastructure workers, some sportsmen and artists (official measure incl. exceptions) were allowed to enter Slovakia only after registering via an e-border form. Crossing the border is allowed with a negative test result not older than 72 hours, or undergoing a 5-day-long quarantine, including a test for Covid-19. From December 7, cross-border workers and students need to submit a negative PCR test result not older than 14 days to be allowed to enter Slovakia. More details.

From September 18, citizens and residents of the Czech Republic as well as other travellers arriving from the country (after staying there within the previous 14 days) are banned to enter Cyprus, with exceptions. More details.

Czechs arriving in Finland wre obliged to provide a solid reason to enter the country (employment, study, family) and undergo a 14-day quarantine. After November 23, two negative test results enable incomers to enter the country. The entry is allowed if the traveller submits a negative test result not older than 72 hours and his/her stay in the territory of Finland does not exceed 72 hours. More details.

From September 28, Greece requires a negative PCR test result for Czech travellers crossing the country's border. Filling-in an online registration form prior to the arrival to the country is obligatory. More details.

From September 28, Austria placed Prague to the high-risk countries list and travellers are obliged to provide a negative PCR test result. From October 30, whole Czech Republic was added to the high-risk list and a negative PCR test result not older than 72 hours is required to enter the country. Between December 19 and January 10, stricter approach should be applied, including a 5-day long quarantine and PCR testing.

Details on all countries by the Czech Ministry of Foreign Affairs, including current measures issued by other countries. Measures related to the UK.

FOREIGNERS employed in the Czech Republic

A modified document (Čestné prohlášení -see attachments below) is required from the start of 2021 for applications within the Government Qualified Employee Program.

On December 3, 2020, a new application form for the Key and Scientific Personnel Program and the Highly Qualified Personnel Program was introduced (but NOT for the Qualified Employee Program). The form was modified due to frequent mistakes in the selection of the relevant embassy for submission of an application. In the part of the form on applicant’s data, it is necessary to newly state the address of the applicant's permanent residence (or the address of residence if the applicant has been living abroad for a longer period of time outside the territory of his or her origin). The information on residence is determining the relevant embassy of the Czech Republic.

The place of submitting an application for a residence permit is the place abroad where the relevant embassy of the Czech Republic is located (eg Kiev, Moscow, Delhi). In this context, Czech authorities advise that when applying for a long-term visa or long-term and permanent residence permit, the rule of the so-called local consular catchment area applies. This means that the applicant can only submit an application in the state: 1) of which he or she is a citizen, 2) that issued his or her travel document, 3) in which he or she has a long-term or permanent residence permit. More.

Full version of obligations applicable to employment of foreigners issued by the Ministry of the Interior:

All migrant workers who have stayed for more than 12 hours in the last 14 days in countries or regions not on the list of countries with low risk of COVID-19 contagion are required to:

Foreign workers are not allowed to start their work in the Czech Republic without submitting a negative test result! Unfortunately, this rule is very often violated in practice. We reiterate that the state of emergency has been declared and violations of counter-epidemic rules can lead to more drastic restrictions.

Even in the case of a negative test result, it is required to restrict any free movement within the territory of the Czech Republic for 10 days from arrival - only trips to and from work and trips necessary to meet basic needs for living, urgent official matters or medical treatment are possible.

Please note that even a visit to the site of the Department of Asylum and Migration Policy at the Ministry of the Interior is not an urgent official matter unless the law stipulates it as an obligation.

In addition, employers of all foreign workers who do not hold a long-term residence permit (ie EU and third-country nationals holding a visa) are required to ensure for migrant workers:

Proof of the provision of these guarantees is a condition for third-country nationals to have a visa label sticked into their passport!

In the event of a proper change of employer, all the obligations listed above towards the foreign worker pass on to the new employer.

In case of non-compliance with the obligations, the employer may be sanctioned for the committed violation (according to § 92n paragraph 1 letter b) of Act No. 258/2000 Coll. on the protection of public health).

See also information by the Ministry of the Interior. More.

See also a summary on the Government official website.

Members of the American Chamber of Commerce in the Czech Republic can receive up-to-date summary of border measures by emailing kbendikova@amcham.cz.