AmCham CZ Statement on US Tariffs on Steel and Aluminum

The Trump Administration announced yesterday that a tariff of 25% on steel and 10% on aluminum would be applied on products from the European Union, as well as Mexico and Canada, starting on June 1. This follows several weeks of waivers while the parties attempted to reach an agreement which would prevent such a tariff.

The Trump Administration announced yesterday that a tariff of 25% on steel and 10% on aluminum would be applied on products from the European Union, as well as Mexico and Canada, starting on June 1. This follows several weeks of waivers while the parties attempted to reach an agreement which would prevent such a tariff.

The White House said the tariffs are necessary to protect the United States' "national security from global oversupply".

A handful of countries- South Korea, Australia, Argentina, and Brazil- have reached separate agreements with the United States, and are not included in the imposition of the tariffs.

What we can expect
When the potential tariffs were first announced in March, EU leaders, including EU Commission President Jean-Claude Juncker, warned that the EU would reciprocate with equivalent tariffs on a range of US products from strategically important political districts in the United States.

Both French President Emmanuel Macron and German Prime Minister Angela Merkel categorized the tariffs as illegal under WTO rules, and said the EU would respond "with determination". The EU could coordinate this response with Canada and Mexico. Canada has announced USD 12.8 billion in retaliatory tariffs scheduled to take effect on July 1 after a two week comment period. Canada also announced its intentions to challenge the US tariffs at the WTO and through NAFTA.

The Trump administration has warned that any reciprocation might result in further sanctions. Prime Minister Merkel worried about the "threat of a spiral of escalation that will result in damaging everyone."

AmCham response
The US Chamber has criticized the administration's move.

"Such a move will hit American manufacturers with higher costs, slow the growth of the U.S. construction sector, and put the brakes on job creation in both of these key industries. U.S. steel prices are already nearly 50 percent higher than those in Europe or China, and aluminum prices have been extremely volatile; this move would add substantially to these challenges," declared US Chamber VIce-President Myron Brilliant. “Extending the reach of these tariffs and quotas to additional countries is certain to provoke widespread retaliation from abroad and would put at risk the economic momentum achieved through the administration’s tax and regulatory reforms. We urge the administration to take this risk seriously.”

AmCham Czech Republic advocates a joint response by US and EU authorities to the primary source of global oversupply of steel and aluminum: the decision by China to increase their production. Only a coordinated effort that compels China to bear the economic consequence of their own policy decision will remedy the current market situation. We view a decision to place tariffs on EU steel and aluminum as counterproductive to that aim. We have informed the Czech Ministry of Industry of this view, and our willingness to work with them to protect both the US and Czech industry from damage caused by Chinese domestic industrial policy.

Background
According the Global Forum on Steel Excess Capacity, the global excess capacity in steel reached the highest level in the history of the industry in 2016, 737 million metric tonnes.

China accounts for 52.8% of global capacity. The European Union has the second largest capacity (11%). The USA has 5.6%.

The EU, China and Japan have registered declines in capacity since 2014. India, Indonesia, Mexico, Brazil and Turkey have increased capacity. Private-sector industry has declined; state-owned industry has increased.

China has announced plans to reduce its capacities to match its consumption over a five-year period.

The US Department of Commerce reported in its Section 232 investigation that US steel is operating at approximately 74% of its capacity and aluminum at 39%. The department concluded that the steel industry needs to operate at an 80% rate to reduce the risk of losing production capacity.

As part of the Section 232 process, the US Department of Defense was asked to issue an opinion of the impact of steel and aluminum on national security. The Defense Department issued a statement that they did not believe the current situation would "impact the ability of DoD programs to acquire the steel or aluminum necessary to meet national defense requirements."

The Department of Defense continued by stating its concern about "the negative impact on our key allies" and recommended targeted tariffs to global tariffs.

The United States is the world's largest importer of steel. 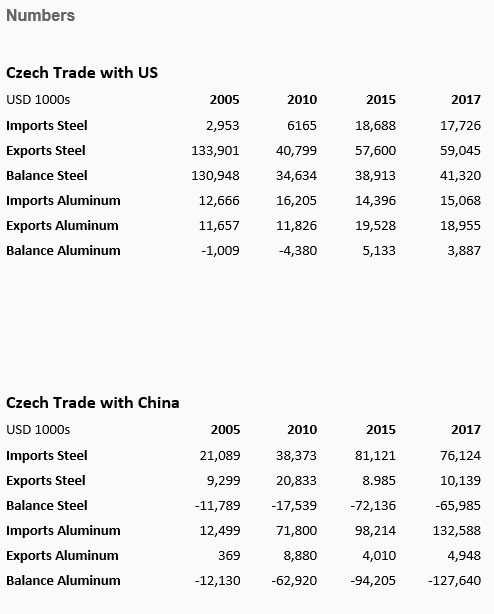 Author of the article: WS

"We advocate a joint response by US and EU authorities to the primary source of global oversupply of steel and aluminum: the decision by China to increase their production." Statement on #steeltariffs & #aluminium https://t.co/mFO5ntmGiq #czechcompete