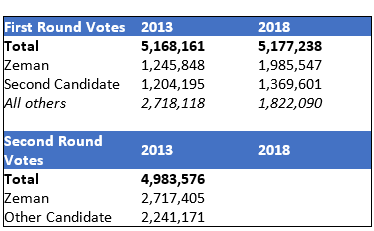 The number of voters selecting someone other than the top two candidates declined by nearly 900,000 in 2018.

The numbers seem to argue against Mr. Drahoš overtaking President Zeman in the second round. President Zeman had a substantial vote margin in the first round, and there is a smaller pool of undecided voters this year than in 2013.

Unlike in 2013, however, this election includes an incumbent president, and can be viewed as a mandate on his presidency. If voting trends hold- and the sample pool is only one election- the turnout in the second round should drop only slightly. It seems clear that some of the other "Anti-Zeman" candidates (Mr. Horáček and Mr. Fischer) are already encouraging their supporters to back Mr. Drahoš. Mr. Drahoš should see a big bump in his result. The question is whether President Zeman can find support from approximately 250,000-300,000 voters who wanted to replace him with someone else in the first round. If he does, he will win another term.

UPDATE: Estimate of Presidential Campaign Sizes - a study by EconLab