Look at the current issue of "Visit Europe" guide" highlighting upcoming events and featuring special offers to the members of AmChams in region.

Below see this issue´s country leads you can join and attached the rest of the offers from Bulgaria, Czech Republic, Moldova, Romania and Ukraine. 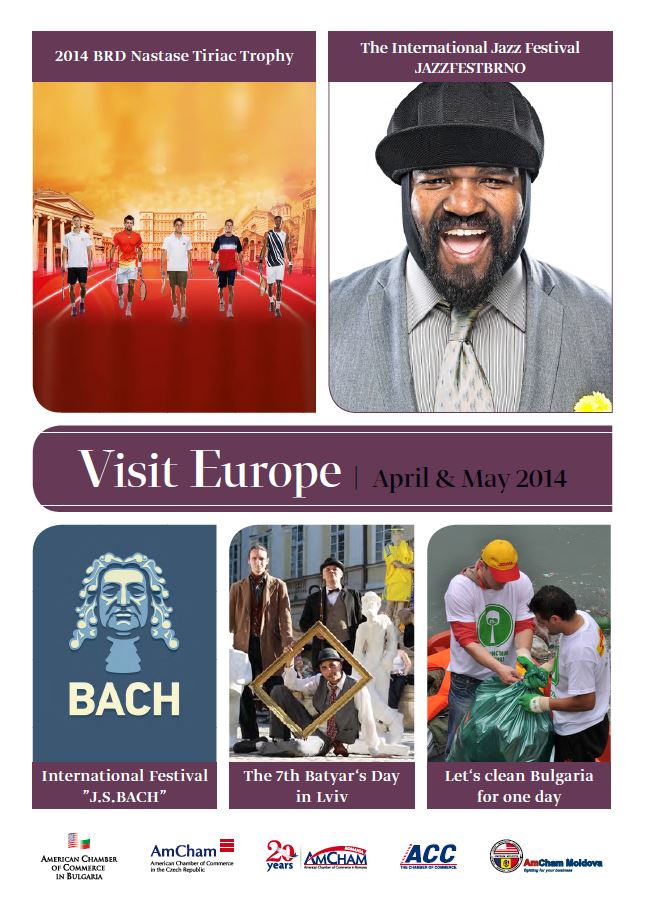 Let's clean Bulgaria for one day
The campaign will be held on April 26. For third time bTV, together with DHL Express and other associates from the business, public administration, NGOs, schools and others will make the largest voluntary action in Bulgaria. DHL Express is the official logistic partner and last year around 200 volunteers from the company made Bulgaria a cleaner place to live.
http://www.btv.bg/da-izchistim

International Festival ”J.S.BACH”
April 03 - 10
The early April brings to the forefront of cultural events of the Republic of Moldova, the 4th edition of the International Festival ”J.S.Bach”
Held at the Organ Hall, the festival includes five concerts dedicated to or inspired by the creation of Johan Sebastian Bach, German composer and organist unanimously considered as one of the greatest musicians in the world.
www.organhall.md

2014 BRD Nastase Tiriac Trophy
April 19-27, 2014 – BNR Arenas, Bucharest
At the BNR Arenas tennis lovers can enjoy the spectacular program of tennis matches and exhibition events with friends and family in a relaxing atmosphere, placed outdoors. During the breaks between matches the public can enjoy a variety of options offered by “Tennis Village”:  coffee shops, areas of entertainment and dedicated events.
http://brd-nastase-tiriac-trophy.ro/2014/en/despre/editia-2014

The 7th Batyar's Day in Lviv
May 1-2, 2014
Enjoy the unique opportunity to dive into stylistics and the atmosphere of an authentic Lviv phenomenon - the Batyars’ World with its own street language and city folklore of the beginning of the 20th century. Lviv Batyar is a free, loving, witty, gallant and romantic idler.
Participate in the Batyar’s Day program and catch the special feeling of the immortal Lviv spirit and the old city humor. Enjoy concerts of Batyars’ bands, comedy competitions, quizzes for children, a retro movie festival, Batyars’ song and dance master-classes, as well as tasty refreshments and drinks.
www.batyar.lviv.ua